Alaska Steelhead Fishing: Experience the Hunt, Prepare for a Fight, Savor the Release 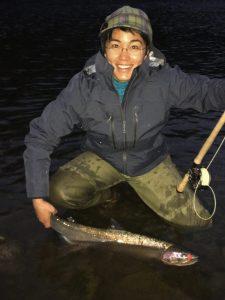 Alaska steelhead fishing is one of the most sensual and gratifying fishing experiences in the world. It is a fishery for the dedicated, the patient. For the fishermen (and women) who enjoy the experience of the hunt as much as they do the catch. Those who are willing to put in a little more effort than most, and endure a little more cold than most, because, in the end, the payoff is second to none.

Steelhead (Oncorhynchus mykiss) are the sea-going siblings of Rainbow Trout. Their native range extends in the North, from the Susitna watershed in Southcentral Alaska, down the Pacific Coast of Canada and the US, to the Baja Peninsula of Mexico.

Fishing for steelhead fills the senses. The sound of the running water as it ripples past logs, rushes over rocks, and laps against the bank. The fresh spring air in your face. The feeling of an occasional, remarkably warm, rebellious sunbeam breaking through the clouds. The sensation of the “tick-tick-tick” of your fly tapping the bottom as the steam rises off the water. The silence that settles around you when the rain quietly turns to snow. You’re cold, you’re wet. You’re ready for a break, you needto warm up and then, there it is! The take! The flash of chrome, you’ve got one on!

Steelhead (and Rainbows) are some of the feistiest, most exciting fish to catch. Ask any steelhead angler, and they’ll tell you the same thing, “Pound for pound they fight better than any other fish out there.” Steelhead take the claim to fame one step farther than their Rainbow siblings. During their years at sea, they generally grow bigger than Rainbows and thus when they return to their natal streams to spawn, these streamlined, “silver bullets” are the prize fish to catch.

Once you have a hook-up, the real fun begins. Landing a steelhead takes patience, persistence, quick-thinking, finesse, and a healthy dose of luck. Their “feisty” reputation is well earned. They run, they jump, they flip, and wrap themselves around a log breaking off, all faster than you can register what just happened. It’s up to you, the angler, to try and keep the fish away from hazards, fight without horsing, and when she’s just about in, and you start to relax, not get your knuckles popped by the reel handle when she spots you and takes off again. 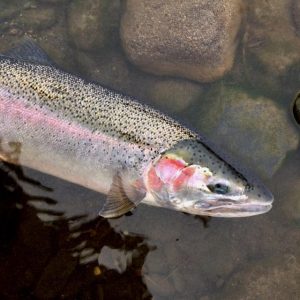 A unique quality among Alaskan steelheaders is that, even when we are allowed to bag a fish, we’re almost exclusively, catch-and-release anglers. We are blessed with native steelhead runs. Our rivers and streams are not stocked as many, if not most, of the runs in the Lower 48 are, and we take our stewardship to heart. Many Alaska steelhead fishing lodges are catch-and-release only, and Alaska’s Boardwalk Lodge follows that tradition. For us, fishing for steelhead is about the experience of the hunt, the fun of the fight, and no matter how tasty they are, it’s not about the kill.

Releasing your fish after a good fight is a magical, transformative, experience. It is one of the only times that we, warm-blooded humans get to physically interact with fish as vibrant, living breathing animals in a truly tactile, sensual way. Cradling the fish in your hands, holding her nose up-stream so she can breathe easily. Letting her rest and regain her fins; feeling her energy return. Then, with gratitude for the opportunity to be here, in the fading light, cold and wet, letting her swim away to spawn, and spawn again.