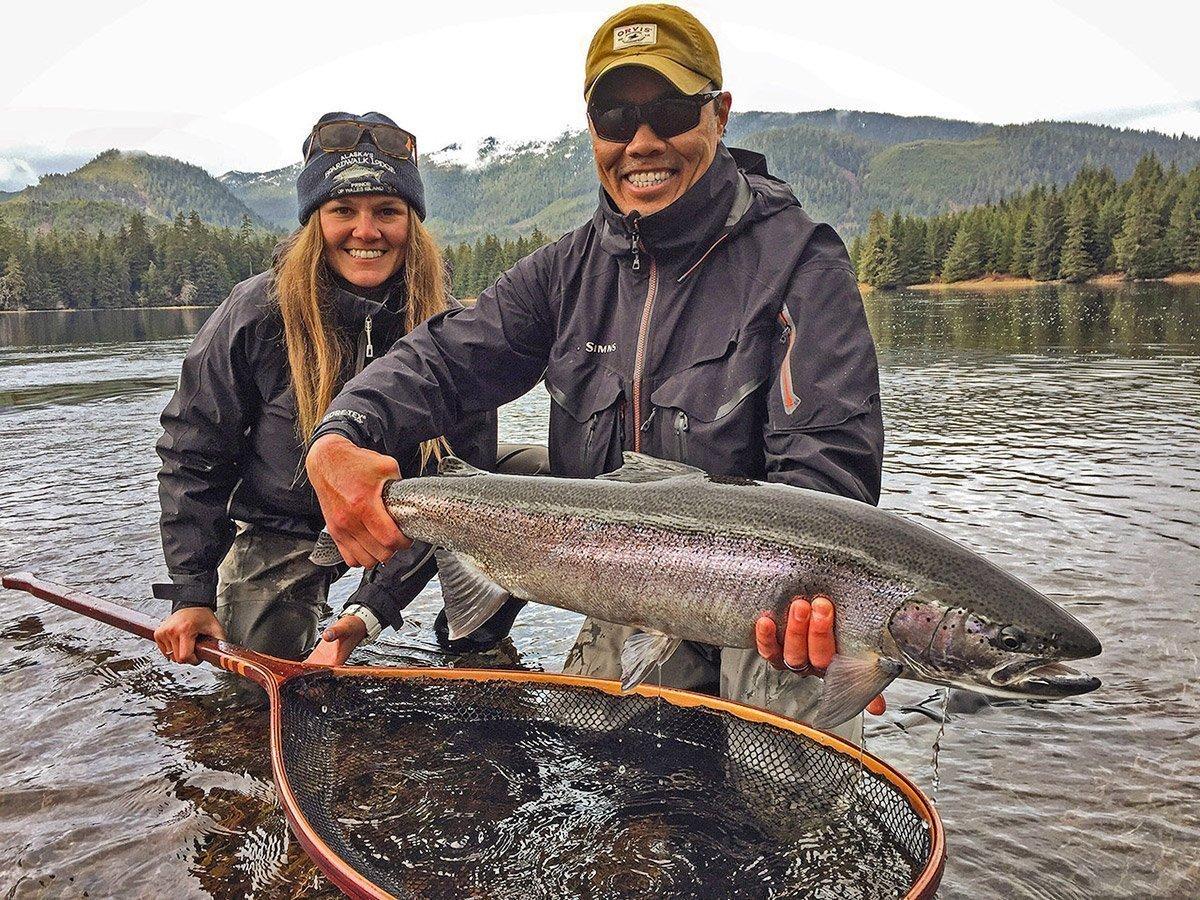 Despite their voracity, durability, and resilience, Steelhead Trout are, without a doubt, Alaska’s most high-maintenance fish. Fishing for these beauties is like spotting the hottest, most meticulous, intelligent, accomplished person around and deciding in advance, “That’s who I’m going to take home.” Steelhead fishing in Alaska takes prior planning, a proper approach, an excellent lure, attentiveness, and a quick wit.

You’ll need to know where to look for Steelhead. Look for cut banks, deeper slots, and areas where willows overhang the river. These areas provide them with great protection from above. Finding these areas on an unfamiliar river can be difficult, especially if you have limited time to explore. This is where your expert guide from Alaska’s Boardwalk Lodge comes in handy. Jay Mar has been guiding for the lodge for the past 17 years. He and his team know all the best places to fish.

Steelhead love snaggy areas that provide protection. While smooth, snag-free bottoms, with open areas above, are nice for casting and bouncing the bottom, those typically aren’t the areas you’ll find fish. Even when you cast and miss visible water hazards, you’re bound to find snags you can’t see below the water. Plan on losing terminal tackle when you’re fishing Steelhead. There’s no way around it. So, take more than you think you’ll need and remember, “If you’re not getting hung-up every now and then, you’re not Steelhead fishing.”

Remember when you head toward the water that Steelhead love crystal clear water. Be sneaky, you’re on the hunt. If you go noisily bumbling up to the bank and into the water, they’ll spook and be gone before you ever lay eyes on them. There’s no need to army crawl up to the river, but move slowly, stay low, be quiet, and follow your guide’s instructions. This will give you the best chance at not spooking the fish.

Once you’ve reached or entered the river, look for the seam. The seam is where the water transitions from shallow to deep. In the daylight, you can often spot the seam where the water changes color. In low light, you can identify the seam by looking for the current changes on the water’s surface. This is the magic zone where you want to fish.

I wanted to thank you for a wonderful Alaska steelhead experience. Your lodge is very deserving of its 5 star rating. Your staff made us feel right at home. We were thoroughly impressed by the exquisite cuisine and your [fishing] guides did a masterful job.”
-Thomas Boyd, Colorado

Standing on the shallow side of the river, cast just beyond the seam. This will allow your choice of tackle to sink down and tap along the bottom, as it rides the current through the target area.

Drifting a fly, or yarn, along the bottom (without a float or strike indicator). This type of fishing is done with a fly rod. Cast upstream and far enough across the seam to give your terminal tackle and monofilament leader time to sink to the bottom before reaching the target zone. Mend your line, so that the fly line is floating freely along the surface with no resistance. You need to feel the tick-tick-tick of your weight bouncing along the bottom of the river.

Fishing with a float or strike indicator. Estimate the depth of the water in the target zone, and set your float/strike indicator above your terminal tackle accordingly. (When fishing with one of our expert guides, they will set the gear for you and take out all the guess work.) Cast upstream and then mend your line. Make sure your float (or strike indicator) is floating freely on the surface, with no resistance. Your terminal tackle should be bouncing naturally with the current along the bottom of the river.

Whether you’re fishing with a float/strike indicator or not, if your gear isn’t naturally bouncing along the bottom, you aren’t fishing Steelhead.

In most cases, Steelhead, do not strike hard. You must remain attentive of your line at all times or you will miss the strike, and your opportunity to set the hook. Fly fishing is by feel while fishing with a float/strike indicator is visual.

Fly Fishing. Steelhead have a very soft bite. They gently pick up your lure and move with it. You will feel a slight tug, or nothing at all, until you pick up your line and find that it tugs back. Occasionally, they will strike hard, but that’s not the norm.

When fishing with a float/strike indicator. In this case, the strike is usually more pronounced, but still not a slam. The float disappears under the water, you tug to set the hook, and then hope it’s a fish and not a snag.

In all cases, set the hook with a short, quick tug. Don’t go overboard and yard on the fish, or you will tear the hook right out of the fish’s mouth.

Fighting to land a Steelhead takes patience and a quick-wit. In the warmer waters of late spring on Prince of Wales Island, Steelhead are generally more active than those in colder more northern or glacial-fed waters which makes the fight even more fun.

To stay ahead of the fish, and keep it from wrapping around a log (or other foul) and breaking off, you must be aware of the terrain, and quick-witted. Be patient, keep tension on the line and your rod tip up, but don’t yard on the fish.

When fishing Steelhead with Alaska’s Boardwalk Lodge, you’re experiencing the opportunity to both enjoy and preserve one of Alaska’s amazing natural treasures. While it seems silly to have to say it, the goal of catch-and-release is to not just release the fish, but to do it in such a way that it survives to spawn again and again. It’s so sad to stand in a river and watch an injured fish float by, nearly dead, because it was not caught and/or released properly by someone upstream.

So, while it sounds like an oxymoron, “Be patient, don’t yard on your fish, and land it as quickly as possible.” Steelhead are amazingly hearty fish and will withstand an amazing fight without sustaining any injury beyond a pierced lip, but even they have their limits. Once you’ve got a fish on, listen to your guide and use your best judgment so that you and your fish both have the opportunity to live another day.

Once you do land your fish, have a pair of pliers or hemostats at the ready to remove the hook and do your best to keep the fish’s head in the water. Keep in mind that it’s technically illegal to remove from the water a fish that you intend to release. So, if you want to cheat and take a picture with the fish’s head above water, make sure that you’ve got your camera out and the shot set up before you bring her head out of the water.

When you’re ready to release your fish, remember that she’s exhausted. Even though you’re excited and ready to get back to fishing, be patient and savor this moment. Gently, but firmly, hold her upright in the water with her nose pointing upstream. This lets the water to run over her gills, with little to no effort on her part, allowing her to rest and catch her breath. You will feel her energy come back, sometimes only slowly at first. As she rests, she’ll become more active in your hands, but don’t let go yet. When she’s ready, she will swim away on her own.

Other Notes (because this isn’t already complicated enough)

Know Before You Go (if you can)

If you have the opportunity to get out and practice a few things before your trip, work on placement and natural presentation.

If you don’t have the time or a convenient river to practice these things ahead of time, don’t sweat it. Your friendly guide will help get you squared away. They’ll also help you battle the inevitable snags so you can get fishing again

If this all sounds like an uphill battle to catch the world’s most high-maintenance girlfriend (or boyfriend) you’re right.  Steelhead are extremely picky, easy to spook, and difficult to please. The good news is that, unlike the girl (or guy) you set your sights on back home, when you come to Boardwalk Lodge, you’ll be Steelhead fishing with a trusty, Orvis-endorsed guide, who will teach you exactly how to lure them in, make them happy, set the hook, and send you home glowing with the joy of success.